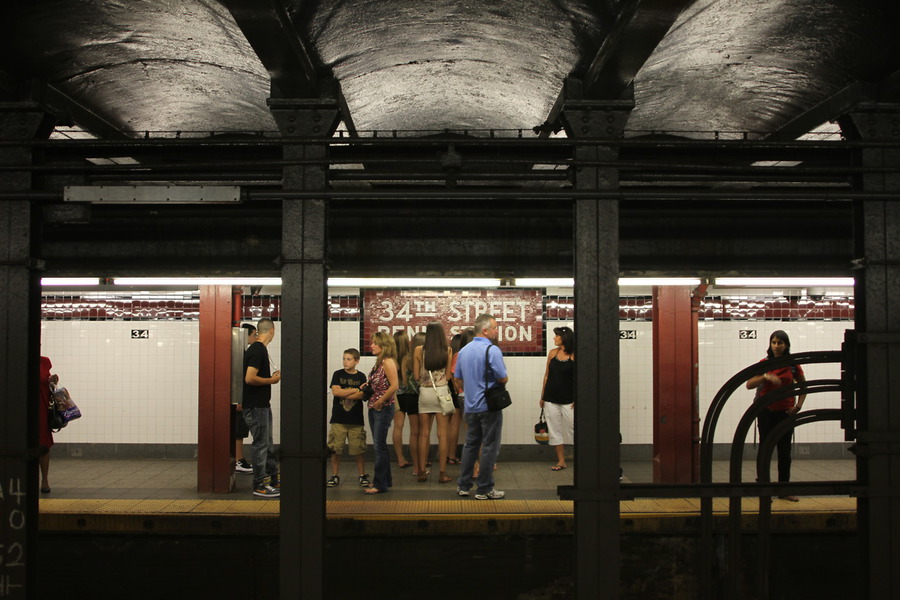 The 34th Street Station is home-base station for me in NYC. Right outside the station are Korea town, the enormous block-wide Macy’s, and most important of all, Minus’s office. 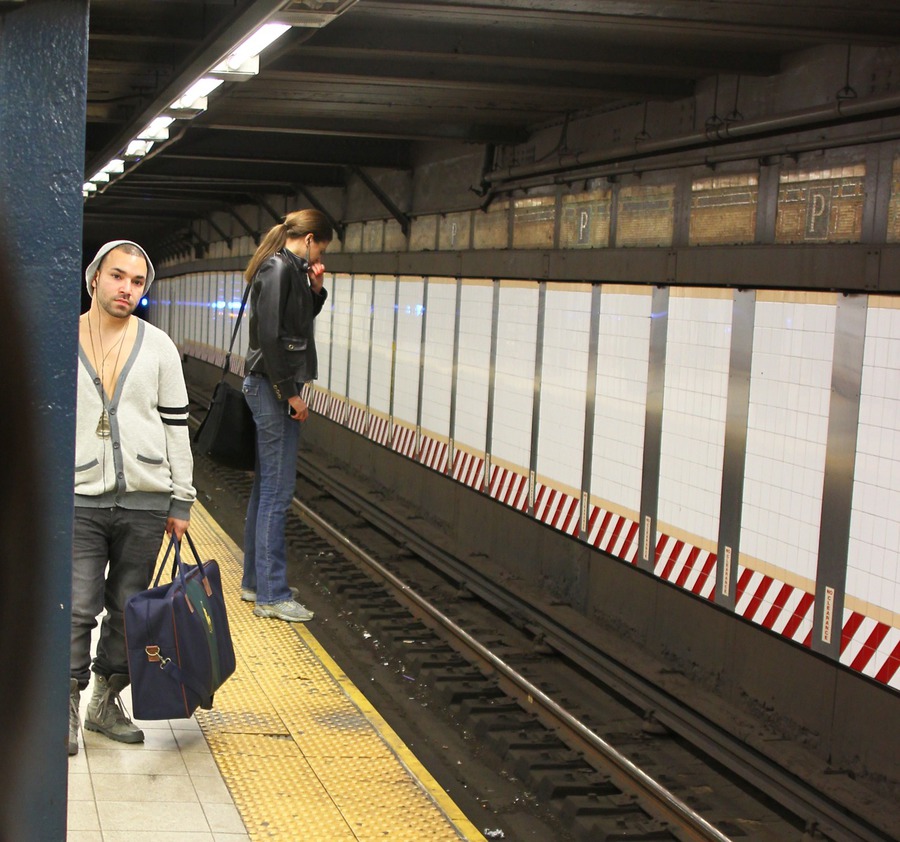 On the Edge. Penn Station, NYC.

Manhattan Subway, NY. This scene in one of NYC's subways struck me as very cinematic...the woman standing on the edge, the pensive man. 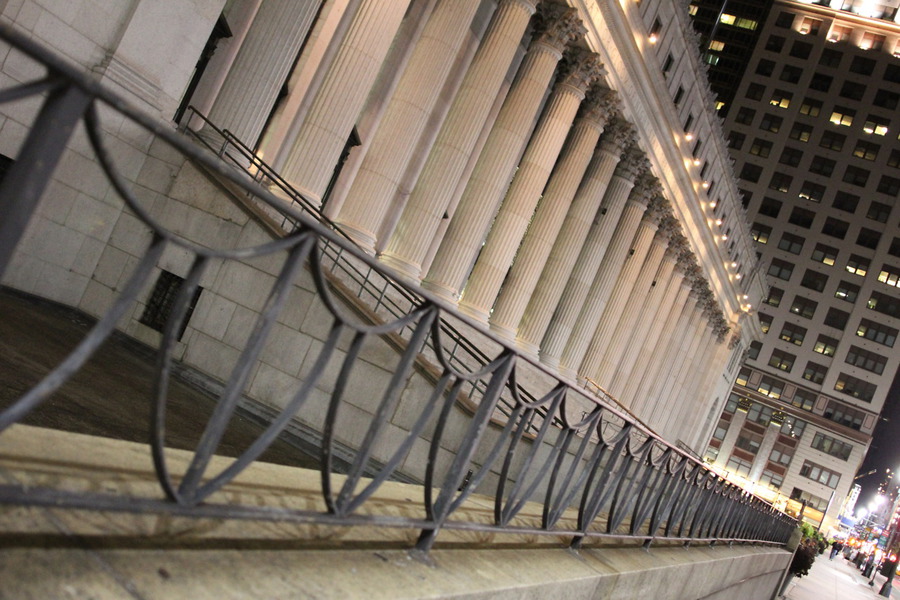 The US Post Office on 6th Avenue and W 32nd Street.

Manhattan is beautiful. What kind of city has a post office that looks like this? I pass by this building everyday on my way to work. 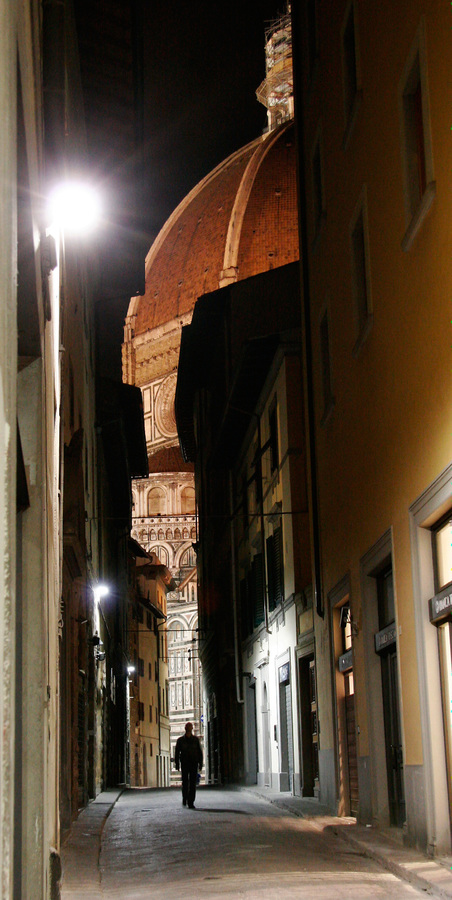 I went to Italy in June of 2005 by myself for a week. I visited Florence and Rome. This picture was taken in an alley by the Duomo in Florence.

For someone who loves beauty, Florence is like finding a friend. Every corner and street beckons to be explored. This picture was taken behind the San Lorenzo Duomo.

Stairs by the Foro Romano.

The sheer oldness of Rome seems to give commonplace scenes a depth of texture. These stairs are at between the Foro Romano (the Forum) and the Piazza Venezia.

NYC has both colorful street musicians and beautiful backdrops, but Rome is ridiculous.

This outdoor market has some fifty vendors side-by-side yelling at you to buy their food. The street businessmen I met in China—-taxi drivers, food vendors, “tour guides”—-were without exception the most agressive I’ve encountered.

I took this strolling around the old residential neighborhood around Yu-Yuan in Shanghai. Because the homes are so small compared to those in the United States, much life is lived in the streets. This man is preparing dinner for his family while his son plays in the alley.

I saw many people depend on West Lake for their livelihood. Their income was solely based on ferrying tourists back and forth in their 4 men boats. They bathed and washed their clothes and food in the lake. This man is fishing for dinner as the sun set.

I found the gardens the most dazzling architectural achievement I saw in China. While I found the Forbidden City impressive, the gardens moved me with their drama and balance.

Although all the gardens I saw were somewhat run-down, the achievements of the architects were hardly diminished. I particularly loved Yu-Yuan in Shanghai.

The elderly couple living in this boat make their income giving tourists rides around the small town of Zhou Zhuang.

After my father died, my mother came to live with me in Seattle for several months. Dad specified in his will that he wanted his mother's ashes thrown into the Pacific Ocean. That Saturday, cloudy and windy, my mother and I drove thirty minutes to Alki Beach with a bronze vase containing grandmother's ashes. I took this picture as mom carried out dad's will. I think she was actually saying goodbye to dad.

I was starting to feel like I was taking the same types of pictures over and over with the wonderful but hefty Pentax 6x7. I wanted to take riskier and more experimental compositions. I purchased a Leica M6 and a 50mm f2. I carried the camera with me everywhere, relishing the freedom of not needing a tripod. I now love the camera because of the photographs I get from it.

Lake in the Cascade Mountains

While driving through the Cascade mountains with my good friend Krishna to Leavenworth, we passed this lake. The onset of Winter in the Cascade Mountains of Seattle, WA is a dramatic event.

This picture was taken a few months before my father passed away on August 4, 2000.

The second in a series of tulip pictures by my mother and I taken shortly after my father passed away.

This picture (taken with my new Leica M6) of a lonely bench reflects exactly how I felt in those days.

After my father died, my mother stayed with me for a month. We comforted each other. Over-sensitive to life's fragility, I obsessed with efforts to leave a legacy. My mother, who loves to arrange flowers, and I put together this picture one afternoon.

Inspired by Weston's green pepper studies, I went out to the supermarket looking for interesting looking vegetables. I found this red pepper after enduring the wrath of a few annoyed customers.

I once methodically traversed the waterfronts of Seattle over a year or so. Noting that I had completed the Lake Washington waterfronts, I decided to start at the canal joining Lake Washington and Lake Union this weekend. The area turned out to be industrial. In a commercial shipping yard, I saw these these two ships: one massive blue tanker and the other a small brightly colored towboat.

I lived in Seattle for nine years.

At first, I found it hard to photograph in Seattle. Although the city is nestled between mountains and waters, the perennially overcast skies and dark green pine-needle trees make it hard to shoot landscapes one finds in magazines and books. Unlike Utah and Arizona, Seattle lacks the reliable color drama of orange ground and blue skies. Seattle also does not have the dramatic rock formations one finds in Yosemite pictures.

Of course, as I learned by continuing to photograph Seattle, every place has its own character.

Taken with a Pentax 67, 105mm lens. The Pentax is a large, heavy, and lovely camera. In the Fall of 1999, I walked around Lake Union in Seattle one section at a time, bettering my photographic compositions in the 6x7 format.